The Vedic sciences from ancient India have given us tools for stress reduction, gaining fulfillment, and personal growth.

Philosophy is the study of fundamental questions about existence and thus is the pursuit of mankind to understand his or her life. 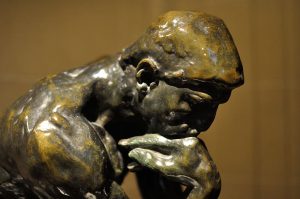 There are as many world views as there are religions and sects in the world. Their value – including the atheistic perspective – is that they give us context and meaning for living.

Alan Watts describes two western world views as ‘ceramic’ and ‘automatic’. The ceramic view sees life from the paradigm of a creator and his creation. Man was molded from clay and life was breathed into him and so on. The automatic perspective involves the idea that the universe originated from a big bang and has been expanding ever since and that evolution has created the stars and the planets and its inhabitants.

Watts then offers an alternative perspective as derived from the Vedas, ancient India’s sacred texts. In that perspective Consciousness/Spirit/God is all powerful and could do anything she wants to do. Each night she slept was 100 years long (a lifetime) and she dreamed life up exactly the way she wants it. After thousands of years of living this heaven she wanted some variety because it was becoming monotonous. She introduced surprises into her dreams for another period of thousands of years. After that she wanted even more surprises and decided to play hide and seek with herself: living a life where she no longer remembered her Divinity; which is the life you are living now.

In this world view, life is a play and people are actors on a stage. After a play is over, villains are applauded as much as heroes because there are no heroes without villains. In your life you are the main character of what Joseph Campbell calls your Hero's Journey. All other characters are the supporting cast. After the play (life) is over, one simply steps off the stage and melts back into oneness with consciousness.

The question is not who is right and who is wrong, but what thought process gives you the most meaning and happiness?

The ancient Indian books give us four sister sciences to help us grow vertically and horizontally. Growing horizontally is called self-actualization: becoming the best you and at the same time accepting yourself as you are, unapologetically (assuming you do not hurt others). Growing vertically is called self-realization: waking up to the idea that all is divine, all is connected, all is one.

The first science is yoga – taking care of our physical bodies and opening energetic channels through breath and movement. The second is meditation – sitting in stillness to recharge our batteries, to realize that we create our outer world through our inner world, and to calm the nervous system. The third is Ayurveda – the medical aspect that understands that one size does not fit all. It utilizes body types to inform treatment and places a big emphasis on lifestyle to prevent disease. And the fourth is Jyotish, or Vedic astrology. It fosters understanding of your psychological profile and patterns so that self-acceptance and fulfillment become more easily attainable for you.

Sherif’s background in monotheism, engineering, and Vedanta has uniquely prepared him to help you successfully navigate the creation of meaning and fulfillment in your life through the lens of religion, science, or spirituality. He has given numerous workshops and led trainings on subjects such as yoga, astrology, mythology, chakras, yoga philosophy, and more.

Sherif’s understanding of Eastern philosophy is in large part based on his study for over a decade with various teachers, including his mentor James Kelleher.

Read More on Our Blog